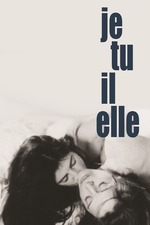 Who sees? Who speaks? In The Acoustic Mirror, Kaja Silverman argues that the literal voice of cinema is male, and that asynchronous female narration challenges said hegemony. Je, Tu, Il, Elle starts with a verbal account of The Genesis According to Chantal, and ends with a sex scene that is above all else functional, serving to complete her before the spectator (and spectatrix).

Akerman drifting like a stray dog, observing like a child, drinking beer Like a Woman, eating sandwiches like a soon-to-be-human. Butter + Nutella on sourdough is the most Euro thing I've seen all week. The combination of spending one menstrual cycle alone in a room while spooning sugar straight from the bag locates her at the precarious intersection of sloth and speed freak which I happen to occupy myself. There she is, watching, waiting... commiserating?... and here I am, doing the same. ️♥️