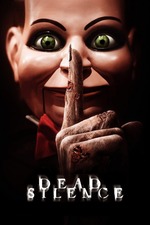 Loving husband Jamie is forced to investigate the murder of his own wife when her mouth is mutilated and her tongue ripped out, shortly after he unexpectedly took delivery of a ventriloquist's dummy. But this movie has one of those storylines where the protagonist easily gets all the answers he's after at every turn; whoever he talks to, whatever he does, advances his investigation without hindrance, which makes for dull viewing. There is a detective who keeps saying that he believes Jamie to be the murderer, but he never sounds particularly convincing about it, what with the bizarre nature of her injuries. Dead Silence sees Saw's writer-director team of Leigh Whannell and James Wan reunite, and is a bridge between that film's colourful lighting and dramatic camera angles, and the jump scares and supposedly spooky ghost faces of their subsequent Conjuring and Insidious franchises. But it falls somewhere between those stools, and the result is a weirdly retro throwback to the good-looking but empty and bland straight-to-video horror fare of the nineties. A fast-cut, Saw-style reveal at the very end is excellent, but isn't enough to save the movie.