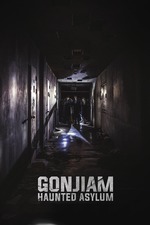 A found footage chiller, centered on an abandoned asylum in the woods, which features all the Grave Encounters and Blair Witch Project tropes you'd expect, although it's updated by having its six camera-equipped paranormal explorers doing it for the hits and advertising revenue on a live YouTube stream.

How much you get out of this movie depends on how much you enjoy watching people scream and cry in the dark, because that's pretty much all that happens. The script makes a huge mistake by revealing at one point that a lot of the spooky incidents are hoaxes, set up to lure more viewers, which at least some of the team are in on. This leaves you, the real viewer, assuming that each subsequent ghostly encounter is going to be revealed as fake, until it's eventually clarified that everyone, including the hoaxers, is now genuinely scared.

But will you be scared watching any of this? Well, I think there's a brief section about twenty minutes from the end where it peaks, thanks to two back-to-back sequences that are quite effective. One of those ought to work especially well for anyone who's freaked out by digitally distorted faces, but it's the accompanying vocal tic that makes it extra weird. Unfortunately the majority of the scares lack any sort of inventiveness or originality; it's a real "seen it all before" kind of ghost train experience. But at least there's not too much downtime with nothing happening; that's the thing that makes most found footage horrors so awful, and this largely avoids that pitfall.