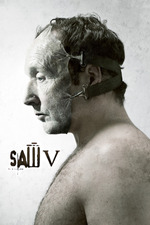 Normal Chekhov's gun: if a gun is seen in the first act, then it has to be used in the third.

Saw's version of Chekhov's gun: if a glass-filled coffin is shown in a flashback in Saw IV, then it has to be used at the end of Saw V.

If I have a criticism of Saw V, it's that the absence of Darren Lynn Bousman is felt. The action scenes are just as good, but in his three previous sequels, he even made the dialogue hyperkinetic, as well as the general pace. But it's got some awesome traps, and the sequence showing Hoffman and Jigsaw setting up the Saw II game is so cool.

I've transcribed all of the victims listed on the first page of the police files:

So if the first two known murders were as simple as the face knives trap and the thing with the codes on the wall and the candle and the flammable gel, then why did Hoffman think that something as elaborate and huge as the pendulum trap was necessary to trick his colleagues into thinking that Jigsaw killed Seth? For all his purported engineering skills, Hoffman is clearly a much more skilled inventor.

And that's a hell of a lot of homicides before the FBI bother to turn up.