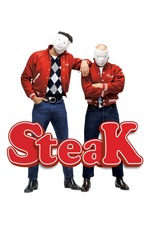 I'm a fan of Quentin "Mr Oizo" Dupieux's later comedy movies, but this early effort only has intermittent flashes of his unique brand of loveable absurdism. In fact, despite being written by the director, it feels more like a vehicle for its two leads, a double-act billed together as "Eric & Ramzy", and I got the impression that this the film is fuelled by their sense of humour rather than Dupieux's.

The plot concerns Blaise, a young man who's released from psychiatric incarceration after being convicted seven years ago for a firearm crime that was actually committed by his best friend Georges. For some reason (ie that Oizo absurdism), they're still both schoolboys at this point, but in the intervening years Georges has edged towards becoming a member of a gang of white lads, the Chivers, who wear preppy cardigans, drink milk and have matching cheekbones and chins. Georges, a brown-skinned guy (like Blaise), has had the requisite facelift and is ready to become a full member of the Chivers, but Blaise's constant presence as he attempts to win his mate back is putting Georges's membership at risk.

A mildly amusing premise, then; unfortunately the scenes that grow out of it aren't very funny. I think Eric & Ramzy themselves have to take a lot of the blame; perhaps their clowning is appropriate for French TV, but Dupieux's later films work so well because his actors play it straight. I think I laughed only once, and that was at a very puerile and obvious blow-job joke.

One thing you can rely on Dupieux's filmography for, though, is a banging soundtrack, and although they're fleeting, the most lively moments feature snatches of tracks by Mr Oizo, SebastiAn and Sébastien Tellier, the latter two of whom also appear on screen, alongside fellow musician Kavinsky, as members of the Chivers. An interesting footnote is that Tellier wrote France's 2008 Eurovision Song Contest entry, and included references to the Chivers in that song.