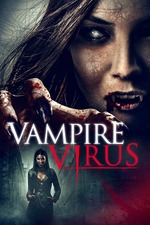 Shiny neon vampire fun, set in New York but presumably made in the UK given all the ropey accents, this is about Jennifer, a workaholic woman who hasn't got laid in years, getting off with a Transylvanian seductress on one of her rare nights out. She's the latest victim of a group of fangy bloodsuckers, but inevitably her wounds heal because the vampire has chosen her to join her tribe. While the opening scenes are fresh, loud and exciting, once Jennifer's fate becomes clear, the script runs out of ideas and just goes through the motions, switching between our heroine coming to terms with what's happened, and the cops and her flatmate (sorry, roommate, this is America after all, honest) trying to figure it all out.

I think I'd have been more into it were it not for the incessant pounding synth score, which initially adds loads of energy, but in never dialling back or becoming more dynamic, eventually becomes really wearing. I think it might actually have given me a headache by the end! It's a decent enough movie with a strong first half, but it never really goes anywhere, which is unfortunate because it's very nicely shot and never has any slow parts.