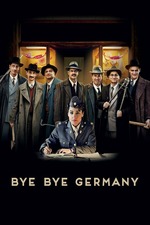 Bye Bye Germany is a film directed by Sam Garbarski that follows a group of Holocaust survivors living in an American displacement camp in 1946 Germany that has their heart set on immigrating to the United States.  In order to do this they need to raise as much money as possible, and they use the connections of their ad-hoc leader David Bermann (Moritz Bleibtreu - "Manni" from Run Lola Run) a former successful store owner, to sell high end linens door to door.  The group concoct a number of schemes to do this, including targeting households with recently deceased family members and claiming they had put down a deposit before passing away.

Those moments are enjoyable enough, especially because the group are pretty ragtag with diverse backgrounds and personalities so their approach makes for some humorous scenes, but it's hard to deny that watching them take advantage of the very people who at best turned a blind eye to the atrocities perpetrated by Hitler isn't satisfying.  And this is one of the central themes of the film that I found to be refreshing - it's not often that films explore the experience of survivors who remained in Germany after the war ended, and this perspective is extremely thought-provoking.

Another element of the film's story is the interrogation of Bermann by the American military on suspicion of collusion with the Nazis, and I had mixed feelings about its development at first.  It seemed to come out of nowhere and it felt like the film slowed down quite a bit as we were then drawn into moments from Bermann's past, which led to similar scenes involving other members of the group.  Someone would ask a leading question, and we would then have another expository scene.  I don't know, at first it was kind of jarring and I wasn't sure I liked it but as the film unfolded and the story developed further it started to work, especially when the intrigue increases.

Bye Bye Germany is beautifully shot, and regardless of my nitpicky comments about its pacing I thought it was a really good film, and I would highly recommend it.  It also has a really freakin' cute dog, and I'm an easy sell when it comes to that.  In all seriousness, I'm traditionally a fan of German cinema and love its often dark tone, especially when it comes to comedies.