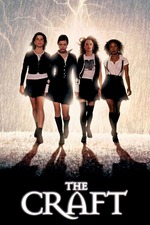 While far from being the scariest and truest horror film, this is an old favourite and a guilty pleasure I go back to over and over again. I first saw it back in high school, back when Channel 4 used to play great films late night on weekends, and everyone in school would come in on Monday morning talking about. This was one of those that was pretty much ingrained in our teenage 90s popular culture. And yes, we all at some point tried out Light as a Feather Stiff as a Board...

I think it retains popularity because there is a lot of reality and relatability in this film, the fantasy elements with the witchcraft only give us a sense of wish fulfilment. How many of us would have loved to cast a working revenge spell on a bully? Or that boy we like who's not interested be bewitched by a love spell? It is only in the second half of the film that it takes a darker turn as we see the consequences of abusing these powers. While quite a tame film in a horror sense, that scene with all the snakes and bugs still makes my skin crawl. And while all four of the lead actresses put in strong performances, it is Fairuza Balk's manic unhinged Nancy who provides much of the films darker and more memorable moments.

"We are the weirdos mister..."