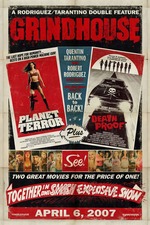 Before I start this review I am going to give you somewhat of a history lesson about exploitation films in the sixties and seventies. The definition of an exploitation film is a film that uses taboo subject matter like sex, violence, and other things to attract a large audience and make a quick buck! They were also films that were made for extremely cheap and usually looked better on the posters than they did on screen. Many filmmakers have cited exploitation films as a source of influence in their style. Two of them include acclaimed independent filmmaking duo Robert Rodriguez and Quentin Tarantino. Both of them are huge fans of exploitation films which can be seen in their other works such as “El Mariachi”, “Pulp Fiction”, “Desperado”, “Once Upon A Time In Mexico”, “Reservoir Dogs”, and etc. However, this time it’s way more evident in their 2007 cult classic “Grindhouse: Planet Terror and Death Proof”. This is the ultimate homage to the grindhouse era that reaches peak authenticity with extreme attention to detail from both Quentin Tarantino and Robert Rodriguez. Since this is a double feature, I am going to review both films and the fake trailers individually and then give my overall consensus of the whole experience by averaging the scores.

Planet terror is about a group of survivors of a viral outbreak of a gas that turns people into puss-filled mutants that includes cherry darling who is a go-go dancer who loses her left leg due to it being eaten off by a hoard of mutants, her ex-boyfriend El Wray who is the baddest motherfucker on the planet!, J.T. who is a funny and quirky barbecue restaurant owner and operator, Dakota Block who is a doctor who is hiding an affair from her husband, Sheriff Hague who is also the baddest mother fucker on the planet next to El Wray. All of them are also fighting against a rogue unit of paramilitary soldiers led by Lt. Muldoon who is played by Bruce Willis. The big take away from this film is that everybody is having a very good time making it while still puting in an extreme amount of effort into it so that the audience is having fun as well. My first positive for this film is the use of digital effects to create the look and feel of a 70’s exploitation film that comes across as extremely authentic. Robert Rodríguez was not only the director of this film but he also shot and edited it which makes a lot of sense because he did a very good job at the editing bay. The film’s use of digitally reproduced film grain is extremely convincing and immersive. Another positive is the practical gore and creature designs done by Hollywood make-up legend Greg Nicotero which adds to the overall sense of authenticity. Also, The cast does a really good job. In particular, Rose McGowan as Cherry Darling who starts off as a very insecure woman who comes into her own as a machine gun legged bad ass mutant slayer. I also loved everyone else in the film like Michael Biehn as the sheriff who exudes a sense lived-in edge that also masks an extreme sense of vulnerability. Overall, everyone did a great job with their roles. I also enjoyed the set pieces quite a bit. They were very well planned and staged by Robert Rodríguez who is a very good action director as seen in his other films like “El Mariachi” and “Sin City”. The action in this film is very fluid and suspenseful which adds to the overall tension of the film. The only negative I have is that there is some cgi that doesn’t fit in that is kind of distracting but it isn’t terrible. Another big positive of the film is Robert Rodríguez’s score which evokes a lot of John Carpenter-esque atmosphere with the combination of synths and electric guitars. Overall, Planet Terror is a big fun throwback to the George Romero zombie flicks of the 70’s and has a great sense of atmosphere and authenticity and I am going to give it an 8 out of 10.

This is Quentin Tarantino’s contribution to the Grindhouse double feature. Imagine a hybrid between “Vanishing Point” and “Halloween”. You then get Quentin Tarantino’s “Death Proof” which is a hybrid between carsploitation films and slasher films. This film is about an aging stunt driver named Stuntman Mike who is a serial killer and his weapon of choice is his car. This film is one of the better car chase films from the 2000’s which was an era in which CGI was being exploited by studios that didn’t know what they were doing with the new technology at their hands. In fact, I’d even go as far as saying that it’s the second best next to “The Dark Knight”. My first positive is the dialogue which may not be as amazing as the pop cultural diatribes in Quentin’s other films like “Reservoir Dogs” or “Pulp Fiction” but it’s still very well written and very sharp. Also, it goes without saying that Kurt Russell is amazing in this film because he hits the perfect balance between charismatic and creepy that most actors would have a hard time portraying in a convincing manner. The acting from all the women in this film is also fantastic. In particular, Sydney Tamiia Portier as Jungle Julia does a great job and so does the rest of the cast. Another amazing quality about this film is the way it builds tension up to one of the most entertaining climaxes in action history. The slow pace at first is a little jarring for some but I think it does help make the climax more exciting and suspenseful. The only issue I do have in this film is that it starts off with using the same digitally recreated film grain but then it completely ditches it halfway which sort of takes me out of the whole experience but not too much. Overall, I feel that Death Proof is definitely a very fun, well made and exciting piece of modern carsploitation cinema that also offers a very unique deconstructionist interpretation of the genre that we’ve never really seen before and i am going to give it a 7 1/2 out of 10.

This is the very first faux trailer that we get that comes before the first feature “Planet Terror”. It is also directed by Robert Rodríguez himself. It’s also the only one that got a feature length adaptation. This is definitely a pretty funny trailer. It is also very insightful of the future of Robert Rodriguez’s career. I also love how over the top it is and I am glad that it got a feature length adaptation.
Overall I’d give it an 8 out of 10.

Werewolf Women of the S.S.:

This faux trailer is Rob Zombie’s way of paying homage to the naziploitation genre of exploitation which includes films like “Ilsa she wolf of the s.s.”, “Love Camp 7” and “The Night Porter”. Rob Zombie must’ve had the time of his life making this trailer and quite frankly it’s the best thing he’s done in his filmmaking career. I mean I like him as a musician but I think he’s a terrible filmmaker. Anyways, what I like the most about this trailer is that it has actual Exploitation legends in it like Udo Kier, Tom Towles and Sybil Danning starring in it. Of course, Sheri Moon Zombie is in it also because she just has to be in everything that Rob Zombie makes but here I don’t mind it because she does a good job! Overall, This trailer definitely captures the essence of the nazisploitation genre while at the same time completely satirizing it in the most farsical way possible. It’s essentially the Blazing Saddles of Nazisploitation films and I’m giving it an 8 out of 10.

This trailer in particular is very interesting mainly for the inspiration behind it. This trailer is directed by one of my favorite filmmakers of all time Edgar Wright who is known primarily for “Shaun Of The Dead”, “Hot Fuzz”, “The World’s End”, “Scott Pilgrim Vs. The World” and more recently “Baby Driver”. He’s stated that the main inspiration for the trailer is whenever they would release horror films from british film production company Hammer Studios in America the marketing would have nothing to do with what the films were actually like. The most notable example of this that Edgar cited was “Don’t Open The Window” which had no window scene in it. The trailer itself is making fun of that phenomenon. It starts off with narration that says “If you are thinking of doing ________ alone, don’t!” The whole time and each one is more absurd than the last one. The most notable moment in the trailer is when a woman goes in the basement and sees a mentally retarded cannibal played by Edgar Wright regular Nick Frost. That made me jump out of my seat scared as shit and laughing my ass off at the same time! This trailer does a great job at satirizing the Hammer Studios horror films of the 50’s, 60’s and 70’s and you can tell that Edgar Wright is a huge fan of those. Overall, I’d give this one a 9 out of 10.

Thanksgiving:
This trailer is also quite interesting from a conceptual standpoint. Eli Roth is a director that I don’t particularly like but this is by far his best work. The set up is that it’s thanksgiving in Plymouth, Massachusetts and everybody is celebrating but an uninvited guest has come to kill a bunch innocent people and horny teenagers! Eli Roth has stated that when he was first offered this job he jumped on it immediately and decided that he had never seen a slasher film take place on thanksgiving and every other holiday got a slasher film so why not make the fake trailer a thanksgiving slasher film. All of the other trailers I would love to see adapted into feature length films but this one and “Don’t” are the ones I would want to see in a sequel to grindhouse. The kills in this trailer rival many of the kills in most slasher films like “Friday The 13th” and “A Nightmare On Elm Street”. In particular, there is a scene where some jock douchebag is watching his cheerleader girlfriend strip naked and bouncing on a trampoline. He gets his head cut of while she’s not looking and the killer puts a knife through the trampoline and the cheerleader does the splits in the air and accidentally lands on the knife. If that isn’t an inventive and memorable kill than I don’t know what is!!!! Along with the other trailers I’d love to see a feature length adaptation of this and I am giving Thanksgiving an 8 1/2 out of 10.

“Grindhouse: Planet Terror and Death Proof” is a perfect example of what happens when you combine passion for film, effort, talent and money together for an extremely immersive and interesting piece of entertainment. It also stands out as it’s own thing because unfortunately the double feature would end up only making 20.5 million dollars against a 50 million dollar budget which established the project as a bomb financially. However, since then it has developed a huge cult following that I am proud to be a member of and who knows given the recent crumbling of The Weinstein Company empire, Quentin and Robert will have the rights reverted back to them and we’ll finally see a double feature of “Don’t” and “Thanksgiving”. Until then, I highly recommend buying this one on Blu-Ray and having a blast with it! My final grade for the whole double feature including the fake trailers is an 8 out of 10.