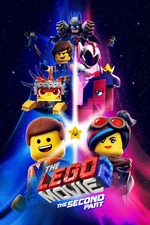 The Lego Movie 2: The Second Part

When someone asks me what the most surprising film you’ve seen in theaters in the past five years is I always answer with one definitive film which is The LEGO Movie. Not only did I think it was better than it had any right to be but it also rivals most animated films that are made by the big studios like Pixar or dreamworks. So naturally, I was very excited for this film and while it isn’t perfect it still holds up quite well to the original. Firstly, the animation is in my opinion better than the first because there is more of a mix of different styles like 2D cel animation and stop motion. I also thought the voice acting was quite great as well with Elizabeth Banks an Chris Pratt returning as wild style and emmet. Everyone else does a great job as well! I also appreciated the fact that it also has a element of being a musical in many ways. I found the songs be quite catchy but well-written at the same time!  I also found the core message about growing up and maturing while also not being so hardened was quite relatable! I also found it to be a very well paced film as well! I only have a few problems with this film. Firstly, I found the first one to be more ballsy with the social commentary regarding Post-9/11 America and Neo-Conservatism. Also, I do feel that some jokes didn’t work as well as others. Overall I felt that while it’s not perfect it is definitely a hell of a lot better than most kids movies out there and definitely would recommend seeing yourself and is enjoyable for all ages! My final grade for the film is a 7 1/2 out of ten!