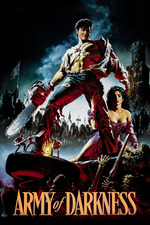 A lot of directors have this annoying habit of putting a moderate (or worse, minimal) amount of reanimated skeletons in their movies. Lucky for us, Sam Raimi ain't one of those losers. The calcium/runtime ratio of Army of Darkness is absolutely insane.

How do you follow up something like Evil Dead II? Why, by sending Bruce Campbell to the dark ages where he has to tangle with superstitious kings and peasants while also reckoning with the awesome power of the necronomicon and the undead fiends who wish to wield it's powers!

One can say a lot about how this third installment dropped a lot of the horror that was present in the Evil Dead-franchise while adding dark fantasy elements and upping the slapstick comedy elements. But.. It really works out well as far as I am concerned. Bruce Campbell makes it work. This man is just frightfully funny to me. Whether it's him visibly dying on the inside when the medieval morons around him prolong his journey back home to modern times or if it's him going through Three Stooges-routines while battling the undead. And at the same time he is such a convincing action hero with quotable one-liners and bucket loads of macho nonsense. A perfect protagonist in many ways.

But yeah.. This was an insane amount of fun. That whole castle siege sequence towards the end where the screen is practically filled with skeletons is really all the reason you need to check this out. The fact that the rest of the film is awesome as well is really just a neat bonus.