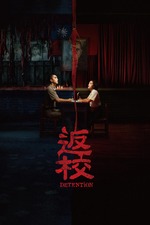 Detention is an historical drama/supernatural horror film that is also a video game adaptation. An unlikely combination perhaps, but what is even more surprising is that it is pretty good!

The story concerns a Taiwanese high school that is up and running during the period known as the White Terror where Taiwanese people supporting leftist ideals were persecuted by the government. A group of high school students and two teachers are running a secret book club where forbidden works of literature are discussed. The group is eventually discovered by government officials and as one of the charged student is recovering from violent interrogations, he suddenly finds himself awake in a strange and nightmarish version of his school. The only other person there is a female student who the guy has had little contact with before. As they both make it through the strange nightmare school, the true reason behind the book club being discovered is slowly revealed.

So.. The political contexts that are at play here did mostly fly over my head, I wasn't really ready for taking in something particularly political at this time. But, I think this does everything it is supposed to do? As often is the case with these political horror films, the sterile and cruel real world clashes nicely with the strange nature of the otherworldly horror. Based on what little I've seen of the game this is based on, this also seems to capture the style of it's source material quite well.

Ultimately I had no idea what to expect from this, but I came out of it as a fan. People who are fond of films such as Pan's Labyrinth or Tigers Are Not Afraid might have a lot to get from Detention as it very much plays around with the same mixture of supernatural elements being intertwined with horrors of a far more human nature. It looks nice, it is sufficiently spooky and it tells a gripping story. It's just pretty good, I guess ¯\_(ツ)_/¯