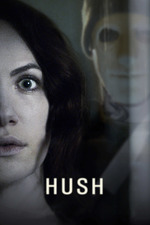 I dunno. Being hunted by a murderous weirdo in the middle of nowhere still seems better than living in a city. Hey-oh!

An author has made the wise decision to move out to an isolated luxury house in order to put together her second book that can hopefully be even more successful than her first effort. Her peaceful solitude is interrupted by a murderous dude with a mask who just seems to enjoy being a fucking weirdo who kills people. Now, the thing is that the author is deaf so the weirdo dude gets cocky and draws out his little game of murder. But, doesn't he know that having a disability in a film means that you are very likely of being dangerously handicapable?! He should have known...

At first glance this looks like an ordinary house invasion thing but it manages to rise above other subgenre offerings thanks to a deliciously evil reveal of the killer's face and a serious mean streak that lasts through the entire film as soon as the killer decides to show up. There is also some nice foreshadowing being done by showing some peculiar household items early on that seem awfully convenient for stylin' all over an home invader, and they end up being used in a most satisfying manner!

I guess my big problem with this is that the lead character is terribly underdeveloped. There's some small talk about her childhood, her family relations, her decision to fuck right off out of urban society... and yet by the end do I really feel like I know her? So much time here is spent on overly long hide and seek sequences, there could easily have been more time put into knowing anything further about the protagonist. I almost get the nagging feeling that this could have been a short film without losing a whole lot..

A solid house invasion affair when it all comes around.. I just kinda wish that it spent way less time sulking around in the dark when it could have explored it's sole protagonist a bit more.