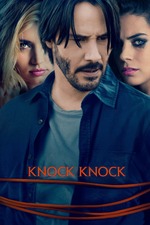 What a weird movie. I gotta respect Eli Roth for just doing this asinine shit and just going all the way with it. It just keeps going where most films would simply get up and leave. Unfortunately, this total lack of care didn't really work out well this time.

Keanu Reeves is a loving husband and father who lives in a smashing house with his loving wife and their precious little gremlin children. For father's day they had planned to go to the beach house together but Keanu got overwhelmed by a sudden onslaught of work-related tasks, so the wife and kids go to the beach alone. What will Keanu do all on his own? Well, he will let two disoriented and ditzy women into his house, they will seduce him and then it just keeps getting worse and sillier from there... Never trust strangers that show up at your house, I guess?

So this is a home invasion affair that starts of looking really strong as it builds up the tension that is created by the sudden visitors. But the film soon find itself stuck in a sort of tonal limbo. On one hand, it is far too mean-spirited and cruel for any of the comedy of it all to land. You will want some of these characters to die, badly. They are of no redeeming quality and the final twist that reveals their true intentions is so daft and pointless that it just leaves you wondering why any of this even happened. And to continue with my thoughts on the tonal dissonance, this film is also just too stupid for the terror to settle in properly. At some point these idiotic character decisions can't be excused as some biting satire or whatever. I counted to at least three separate occasions where any common yokel could easily derail the sinister scheme that is played out with a minimal amount of effort. If your characters are gonna do really dumb decisions, you either have to present them with overbearing stress or put them in a fictional world where common sense is shown to be a foreign concept. This film provides neither...

And yet... I didn't hate all of it.. Despite what many others are saying I actually thought that the performances where fitting across the board. Yeah Keanu is basically a scenery-chewing wooden doll here but the way the plot of this film goes, that is exactly the performance I expected out of this. That monologue about "free pizza" was genuinely fantastic, you can pretend that you liked it "ironically" (what an idiotic concept, show some damned pride for your tastes!) all you want but you know it was genuine perfection. The problem is that these offbeat performances are surrounded by a film that is ultimately unsatisfying as it helplessly drifts between two clashing tones. I think this is the first time where I understand why people have a problem with Eli Roth. Hostel and Cabin Fever are good, but this? Yuck.