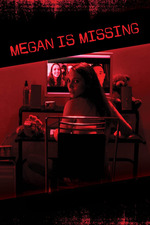 Lake Mungo's younger and less talented sibling who the parents only really pay any attention to because they know they are socially obligated to at least pretend like they care about their children.

Hey did you know that there are bad people on the internet? Megan Is Missing knows that and it won't waste any time sharing this knowledge with you. Megan is a young teenager whose troubled life takes a dark turn when her new online boyfriend starts showing his true colors. Boy, what a bummer. We follow the narrative of her disappearance through various video diaries, video calls, news reports and some more.

I know why people loathe this as much as they do. Apparently this film gained some sort of cult status on TikTok and that should be enough reason to avoid that platform for any sort of horror film tips. The first half of this film is virtually unbearable, that long house party scene in particular is such a miserable and, for a found footage film, unnatural sequence (who walks around filming an entire party on their phone like that?!). Where this film gains some slight momentum is towards the second half, when Megan's disappearance kicks in (it's literally in the title, no spoilers here!) and the tepid phone recordings of various teenage characters are joined by some more tolerable news report sequences and also some unnerving photo sequences (this film pulls of a silent jumpscare, which I must admire!). And of course the last 20 minutes or so are relatively disturbing, nothing you haven't seen before but that dragged out sequence with the digging I actually found to be really well done. But even the more interestingly made sequences are ultimately bogged down by the subpar acting, script and mostly everything else. I heard someone suggest that most of the 35,000 dollar budget went towards the special effects for the ending and I am willing to believe that.

Not really that good, but as far as I am concerned the second half gets too ambitious for me to consider this the absolute bottom of the barrel. The average viewer has nothing to gain from watching this though. Just watch Lake Mungo instead. It does something similar to this film, only so much much much much much better..