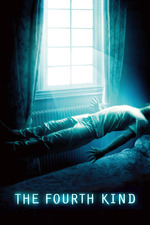 Damn it this start of with so much promise. Milla Jovovich starts us of with an Alfred Hitchcock-style intro where she informs the audience that the film they are about to see is based on real events and is indeed very frightful. Is it though? A little, at some points..

The Fourth Kind presents itself as a pseudo-documentary that covers a supposed string of alien encounters and strange disappearances in Nome, Alaska. We are treated to two different films of sorts. One half is a dramatization where Milla Jovovich plays the dramatized version of a psychiatrist who interviewed the people who had the strange encounters and the other half is the "real" documentary footage which shows some of the dramatized scenes as they played out in "real life". The two films often overlap and play alongside each other, which gives a decently pleasing presentation if you're into the whole mockumentary format.

Now, I kinda adore the vibe they got going here at some points. There is an early sequence where a number of people speak of their encounters with a strange owl sitting outside their bedroom window. At this point I was just hooked, I love that cryptozoology crap! There is a strange, dreamy feel to these early scenes that just hits the spot when you're watching something alone at home while a nasty snowstorm rages on outside.

A thing to note though is that this film is a bit tacky.. Not only is all the supposedly real footage very much fabricated (I will presume that the stories which the characters share are also entirely fictional), but Nome does also have an actual history of people disappearing and never being found again. Apparently this film went hard on the "based on true events"-stuff when it was being marketed back in 2009 and apparently quite a lot of people were not all too happy about people's actual disappearances being used as a base for some tacky story about alien abductions. If you can look past that stupid aspect of it this is still alright, I'd even argue that this being crass and disrespectful makes it about 90% more interesting than it should be.

Where this loses me is when the dramatization takes up far too much space, focusing in on the daft family drama of Milla Jovovich (I'm pretty sure the dramatized reenactments shouldn't take up all that much space in a documentary..). But still, even as that bullshit gets overwhelming there are still some nice bits of suspense and disturbing shit to enjoy (some grainy sound recordings I found to be particularly well done).

Definitely a strange film, but not strange enough after a while. Still worth a shot though.