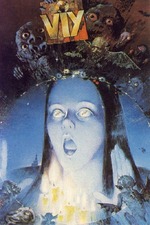 Synopsis: “ After accidentally killing a witch on a drunken holiday, A young priest is ordered to preside over the wake of the witch in a small old wooden church of a remote village. This means spending three nights alone with the corpse with only his faith to protect him and it from evil spirits.”

“I summon vampires! I summon the werewolves!... I summon Viy!”

Slightly confused trying to find it this movie originally because there’s a 2014 remake looking much more action like (Think of “The Brother’s Grimm”) and the 1967 one I originally tried to find.
But Luckily youtube has the original in both English Sub and Dub.

The movie comes off like a fairytale with a greek tragedy vibe, where all the downfall of the protagonist is self-inflicted, There’s a change that occurs after a certain event that takes away a bit of that fantasy and leads it more towards the path of a classic Hammer Film, but with probably a bit more humor than you’d expect.

It’s a little bit slow, but the movie isn’t exactly feature-length so the slow pacing isn’t really notable and to me, the movie actually went by really, really quick. That leads a lot to just how well it’s able to draw in the viewer because, for a 1967 movie, it still holds up the entertainment value. The ‘Horror’ Factor? Nah, not really, but for the time I can see this terrifying person in the cinema around the 1960s; especially at the end sequence.

The scenery and countryside really feed into the fantastical folktale ambiance the movie presents itself as.
While there were minor exaggerations, it’s largely grounded in reality. Aside from there being a few gothic and expressionistic scenes in the church. No matter the area being filmed, A little more flavor was the Russian Chorus Music left in the English dub I watched which is both beautifully haunting and appropriate for the movie.

It’s a part of film history, being one of the only genre films and the first horror film to come out of the Soviet area. I’m sure it had a lot of restrictions on what it could show and for a procession horror movie to come out of it is a miracle.

The final chapter of this movie un-mistakingly is where the majority of the horror lies and is a mesmerizing and satisfying payoff. A real treat that comes off like a play.