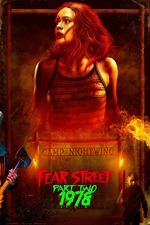 So Fear Street isn't three separate features as it's been marketed. I wouldn't consider it an anthology or a trilogy either. You can't watch them independent of one another and get a coherent narrative. Should have been darker adaptations of R.L Stine's stories and each one should have been wholly unique. I gave this format a chance, but 1978 burned me.

Also, why didn't co-producer Adam Wingard direct an episode? This has pretty much the same look as 1994 and another missed opportunity is depending on one director for the whole shebang. So yeah, 1978 basically doubled down on the stuff I didn't really like much from Part One.

I love summer camp slashers and the setup here was wicked cool. Great use of seventies music. I know some reviewers kind of find the reliance on pop tracks to be lazy and overly nostalgic, but I grew up in the era of packed soundtracks and I kind of groove to the constant needle dropping. The campers and counselors were nicely introduced and well cast. Love that they cast a sexy redhead in the lead and you can be assured I'll look into Sadie Sink's other credits.

Sadly, that's kind of where my positivity ends. This damned thing takes over forty damn minutes to get to a kill. Forty minutes! The pacing was DOA. After the brutal kills, tension and hard-edged violence of the first part, I'm kind of stunned that this one had less memorable kills and was so bogged down with sluggish backstory, maps and convenient plot connections. Lord, why did we spend so much time down in that plot hole of a cave setting. Get back up to the camp hijinks and stop ducking the story you promised.

Ultimately, just bummed that despite a few obvious nods to Friday the 13th, The Burning and Sleepaway Camp, we don't get the epic campground massacre we were promised in the teaser. Too many fucking final girls spoiled this shit, too. While I don't expect a contemporary mainstream slasher to give me lots of boobs, I'm going to call them on that anyway. Mostly because it's criteria I set to classic era slashers and they pissed me off enough. I don't really care that the director was a woman either. So was Amy Jones, and she understood the lowbrow nature of the slasher genre she was playing in and delivered on all the requisite tropes. At least we needed more of the creative kills that made 1994 surprisingly gritty at times.

So the sophomore jinx has struck and I'm not going to dive into 1666 without repose. The reverse structure kind of bothers me now, too. The whole cursed town element is pretty much the weakest part of all this. I don't really feel like I need or want to learn more about Sarah Fier.