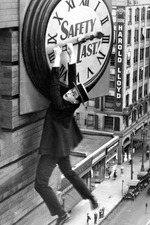 Desperate to impress his girlfriend back home, an inner city store clerk lies about being promoted to manager, which leads to complications when she pays him a surprise visit in this Harold Lloyd comedy. The film is best known for its iconic final sequence in which Lloyd ends up hanging from a clock high up on the building where he works, but there is actually much more to Safety Last!. The climax is merely the culmination of his character progression as he is finally forced to keep his word and scale the building after an hour of the bribing, cheating and tricking others - including his fiancée. Lloyd is charming as ever and the supporting cast is solid, with a special mention to Westcott Clarke as an indignant floor walker. The stunt work is remarkable throughout too, and even after four viewings this still feels as fresh as ever.