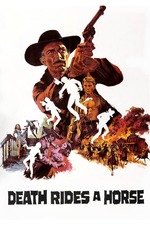 A few dollars less will get you John Phillip Law as our Clint Eastwood hopeful, continuing the Lee Van Cleef badass mentorship program. Death Rides A Horse begins with a young boy witnessing the sexual assault and massacre of his family - complete with visual clues as to the identity of perpetrators for his eventual revenge. Our heavys are made up of the Dollas Trilogy rogues gallery, with a meaty role for Luigi Pistilli as the primary antagonist. The variation on the usual suspects is the addition of magnificently sleazy Anthony Dawson, and it's always a pleasure seeing him get the comeuppance denied us Hammer Wolfman fans. The child who witnessed these brutes grows up to be Law, with Van Cleef as a former gang member left to rot in prison whose release spurs the duo's ride for revenge.

Scripted by Luciano Vincenzoni, Death enjoys his usual tight pacing, and the playful banter one expects from his work. There are a few transitional cuts that are quite jarring, and the third act features a Magnificent Sevenesque siege that goes nowhere, as well as having a twist you should see coming from the opening sequence. These few missteps aside, Law is a strong co-star, and fans will find this horse to be one of the better vehicles for both Death and Van Cleef.

The Stranger and the Gunfighter