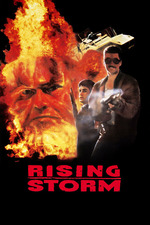 For those of you familiar with the comics of Frank Miller, this portrait of dystopia America is as close as we've gotten to the Martha Washington vision.

Gibraltar Entertainment means that this post-apocalyptic United States is actually South Africa & Namibia. Having broken in with the company's Headhunter, Francis Schaeffer is once again in the directors chair. A repentant figure in the rise of the Christian Right, Schaeffer has brought his baggage to Africa, but the religious chip on his shoulder helps to further form the unpleasant theological society present in the film. While some of the rhetoric is purposely dumb and irritating, nothing is as film breakingly amateur as the minister's reaction in Headhunter's baptism scene. The script is by Gary Rosen (Major Payne) who has a strong hand at light comedy, as well as super producer William Fay who was heavily involved in the early Gibraltar films. The three men had previously worked together on a science fiction flick also set in South Africa called Ship of the Desert, but there is so little information available about it, it may not have been completed.

Rising Storm tells the story of two brothers (Wayne Crawford and Zach Galligan) who get caught up with two sisters (June Chadwick and Elizabeth Keifer) and are tricked into an archaeological dig to uncover some subversive antiques (a video tape of William Katt as Johnny Fever). Complicating matters is Chadwick's ex-husband John Rhys-Davies who is hot on their trail with a large military force at his disposal. Galligan gets top billing even though his character is just kind of there - amiable and ineffective. I'm a massive Gremlins fan and really like Galligan, but the character is just present to anchor the lead's rage against this future society. This is the Wayne Crawford show, and at times, he actually manages to morph into Duke Nukem. The film can never recapture the energy or sleaze from his initial prison brawl, but it tries hard. The main focus is on Crawford's personal betterment through knowing June Chadwick. This is the third of four films starring the two, and while they have chemistry to spare, this is their most organic pairing.

As a film, the initial hour lets the relationships slowly play out, while building up its disturbed landscapes. Rising Storm seems to only become an action film in its last twenty minutes, and while throwaway gags of half naked extras brandishing machine guns are in keeping with the film's humour, it seems to run out of steam just as its starting to warm up. This is more due to budgetary restraints than technical competency, but still leaves one wanting.

Weak finish aside, this is William Crawford's petulant, whiny, everyman at its finest - and fans of 80s post-apocalypia can definitely do worse.