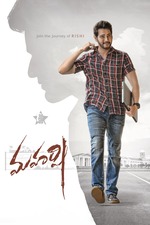 there hasn’t been a mahesh babu film i could sufficiently tolerate and this was no exception. daft execution of a ridiculous premise with a dumbing down of virtually every element of filmmaking. the hagiography of the hero isn’t a unique framework in telugu/indian cinema, but unlike in other films, with other actors, where the “mass”, masala moments seem to be born out of some semblance of thought and technique — a well choreographed dance number, or, more frequently, fight scene, for the obligatory display of machismo — and the subsequent fanfare seems earned, these same moments here operate purely on suspension of disbelief. the hero delivers a fatuous monologue and everyone on screen bursts into applause, the former doing nothing but bellowing the people into submission.

what was interesting, though, was the relationship dynamic of the lead pair in the first half: two people drawn to each other ultimately seeking different things — from life, perhaps from each other. against my expectations, the man doesn’t tell her to have bigger dreams than marriage and family (unlike, say, in Maari 2, where Dhanush, routinely under fire for his regressive antics on screen, decides to combat this criticism by essaying the role of a woman’s messiah: why do you want to cook and clean for me? look how far women have come!), but rather suggests they part ways because their pursuits differ and are incompatible. the woman is decidedly pissed, as is a mutual friend — the latter to the point of violence — and you think, dude did nothing wrong, he was straight with her. this thought led me down a peculiar rabbit hole that prompted a different stream of consciousness entirely: we talk a lot of victim derogation, about rape culture — what about when it comes to love? i was then reminded of this pithy couplet, courtesy Varun Grover —