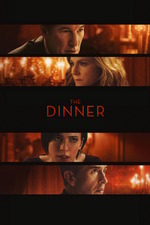 This is such an off film and I don't know if I like it or hate it but here I am 24 hours later and it is still seared into my brain and bugging me. Not many films do that to me anymore.

The premise of the film is two brothers and their wives meet for dinner to talk about what they will do with their children who have done something... They shouldn't have done. Don't want to say more than that. When dealing with the issue of their children and what they have done this film is strong as we see dysfunction rule amidst what is and isn't a moral dilemma.

Where this film falls is when showing us the mental health issues of Coogans character. Depicted brilliantly by Coogan but not sure what this side issue brought to the table of the film.

The genius of this film though lies in the last 3 minutes when all the plot lines come to a head and so much happens and it is in these 3 minutes where we see all the adults for who they really are and I think if it wasn't for thee last 3 minutes this film would have fallen and died, but these minutes were so well crafted it made all that came before seemingly worth it.

I couldn't watch it again but at the same time I want to for the last 3 minutes, but those last 3 minutes are nothing without all that came before it.

A strange one but worth a watch with some people and having a few beers after to talk about it.