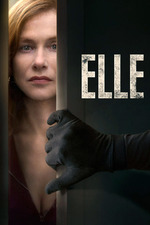 Elle is all kinds of disturbing, but that's why I love Paul Verhoeven. It's brutal, unforgiving, and quite disgusting. There's also a shocking amount of comedy; many laugh out loud moments that had myself and the the theater cackling through out. Major credit to the writing! Isabelle Huppert was masterful; probably the best female performance of the year.

Even though this isn't  one of my favorite Verhoeven films. I am beyond impressed he was able to make such a quality film after not making a full length feature in 10 years!