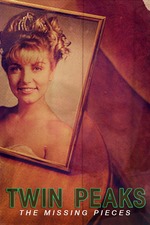 - FBI agent Chester Desmond punches in face of arrogant local Sheriff of Deer Meadow i.e sheriff Cable and punches him again and again and again and finally comes near to him, bends his own strand of rebar destroys every bit of pride and virulence by his two powerful hands.

Me: Wow! Dasmond is even more handsome than Coop. I need this scene attached with FWWM.

- Agent Cooper stands in the doorway of his office and talks to Diane (unseen and unheard) offscreen. Diane has challenged him to figure out what she changed about the room. After thinking about it, Cooper figures out she moved the clock a few inches from its original position.

Me: Ohho! The plan of implementing Diane as a human figure was predefined in the Twin peak's World..Lynch is f****** GOD, I've faith on his works..whatever he has done that must has some reasons.

-Phillip Jeffries in lobby of a hotel in Buenos Aires, the Palm Deluxe hotel, got a letter from concierge who says him "the young lady left", when Jeffries asked him about "Judy".

-The whole sequence how Jeffries has vanished again from the office of Gordon/ just before vanishing up suddenly Gordon shouts "MAYDAY!" Jeffries looks at a calendar and realizes to his shock that it is February 1989/Jeffries abruptly appears on a staircase in Buenos Aires in severe pain. A maid is stumbling away, while a porter proclaims he has soiled himself while asking where Jeffries went. He screams "Ayúdame" (Spanish for "Help me") over and over as Jeffries himself starts screaming.

-A happy Leleand teaches his family how to tell "Hello, my name is—" in Norwegian to Sarah and Laura. They join each other's hands and start repeating the phrase until they are laughing. They are having a good time and enjoying the dinner on that night.

Me: (Crying) Such a beautiful moment! A mere fragment of happiness in between some ocean like tragically abhorrence events. It might would've been a vital sequence if it has included in the film...it may have been adding a bit more sadness, a bit more depth to the core tragedy of the film I.e a father kills and rapes his own beloved daughter by coming under the spell of an evil entity.

-Dell Mibbler comes to the Packard Saw Mill and complains to Josie Packard and Pete Martell that their two-by-fours are not exactly two inches by four inches. His complaints distress Josie and frustrate Pete. Pete finally explain, “Mister Mibbler, look, down at your bank, is a dollar still worth what it used to be?” Dell quickly apologizes.

Me: wow, lovely! Beautiful quick harsh words exchange between Pete and Dell
taps into a whole host of American fears and anxieties into the nineties about the economy and about industry, and the gradual diminishing of both. Afterall Time takes it's tax: what's fresh today, tomorrow that will rot, it's nature. Though it has nothing to do with main story of Twin Peaks but it's beautiful!

Me: (Trying to connect the dots) I was f**** tired while thinking about what's the meaning of that angle in the last sequence of FWWM. HERE Doc Hayward gives Laura a secret message that little bit explains the "angle" thing. Thanks Doc.

- Bob's Possession on Laura under the rotating ceiling fan.

Me: it's Devine, it's extraordinary, it's horrifying af, it's even more terrifying than any Bob scene of Twin peaks world, it's THE BEST scene which definitely deserve to be in the final cut. But unfortunately it's in "missing pieces".

- A shot of Glastonbury Grove, with the title card "Some months later". Annie after rescue from the Black Lodge was brought from Glastonbury Grove to hospital by Sheriff Truman. She is unresponsive with her face bloodied. She is wearing Caroline's dress on the stretcher.

Me: oh! finally gotta some news about Annie.

- At the hotel, Dr. Hayward and Sheriff Truman hear Cooper/Bob hit his head against the mirror and rush to check on him. The doppelgänger, still cackling "How's Annie?" hears them and quickly lies on the floor. They come in and help him up. The doppelgänger claims he struck his head against the mirror and it "struck [him] as funny." When Truman tries to tell him they should go to a hospital, the doppelganger replies, "But I haven't finished brushing my teeth yet."

Me: This can put ice in the head of people in 90's who have watched TWIN PEAKE season 1&2 and FWWM that time and then wait that long for it's third season...atleast it confirms the Coop who come out from Black Lodge he's not real Coop.

Finally TWIN PEAKS: MISSING PIECES is nostalgic, released after two decades since Last Twin Peaks episode have aired on TV , having length of 91 minutes it's more like watching another feature length film of twin peaks after FWWM. It tells a lot about investigation, about dynamics of Palmer family, about slowly varying motif of the show , about relationship dynamics of the characters of Twin Peaks, about mysteries of Black Lodge, about friendship berween Laura & Donna and most importantly about the terrible psychological disturbances & depressions what a young girl like Laura have been going through. Lastly there're few scenes which seems amazing which may doesn't have anything to do with main film but still I would definitely like to watch them inside the film and there're also few scenes which can explain some unresolved mysteries of Twin Peaks which had never been explained before and also few scenes are there which have looked really powerfull and heavy in perspective of film's plot but idk why they're not inside the film? But as I have said earlier Lynch's works meant to be meta and abstract but detailed that's may be the reason why few important looking scenes should've been cut away from final film...whatever I have faith on Lynch.
******************************************************