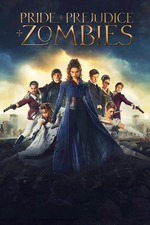 While this could have screwed with both the marriage plot and zombie genre in a 'Shaun of the Dead'-manner, it's decidedly half-arsed. It's 'Pride and Prejudice' without the subtlety; it's zombies without the scares.

In cramming in all the zombie stuff, so much of the Austen characterisation is lost. With zombies around, there's no need for Caroline Bingley as a delicious villain, no commentary on the state of marriage, and so apart from the occasional zombie, there's very little tension in the 'Pride and Prejudice' side of affairs.

Matt Smith is surprisingly effective as Mr. Collins, but his character gets a little lost as Lady Catherine de Bourgh becomes zombie ass-kicker supreme, so why wouldn't you become slightly obsessed with her? I haven't read the zombie P&P by Seth Grahame-Smith, so it could just be the film script, but here lies the problem: the author seemed so intent on changing every other character to something zombie-related, that it completely breaks the subtle tensions between the characters of Austen's novel.

It's a cheap cash-in, the provocation of changing a beloved literary work much easier to guarantee yourself an audience than if you were to write your own zombie spoof 18th century romance. I don't know if this is true of the Grahame-Smith novel, but for the film is definitely is.

Elizabeth Bennett becomes unlikeable, overly proud and prejudiced without any redeeming qualities. On a superficial note, Lily James seems unable of closing her mouth, and her tits were pushed up to underneath her chin - my own started hurting in commiseration as the film hit its second half. Lizzie becomes incredibly sexualised in this film, zombie slaying showing her knickers more than once, bosoms heaving in exertion, thighs used in Xenia Onatopp-worthy moves. She can kick arse, but in the end still has to take Darcy's name, without having Austen-Lizzie's awareness of what marriage can do to women.

I'd say 'Buffy' has more Austeninte spirit than this film.