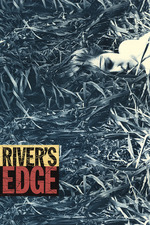 "You didn't have to call me a stupid bitch."
"You were driving right past us, we had to yell something."
"I got a name you know. You're lucky I didn't just drive right home."
"Okay, okay, okay. I'm sorry, Clarissa, but you've got to understand that in a time like this where every fucking second counts, a man can't waste his time choosing words."

Crispin Glover in this film is pretty much a drinking game waiting to happen. I want his "gahddaaahmnaaht" as a ringtone, I broke into giggles several times during the film. Luckily, I read this excellent article on the California Shift in American pop-punk recently, and I don't know if that's what's happening in Glover's accent, but it makes sense. Glover is way over the top, but it kinda works, because at what other age do you adopt strange ways of dress and talking more than in your teens?

I found this film absolutely shocking and mesmerising. I couldn't quite gauge where it was set (Northern California?), but the opening scenes with grey skies and fog reminded me of 'Twin Peaks', only three years before it was made. It lacks the glamour of a lot of other teen films, lacks the sense of adventure as the kids are stuck in a dead-end town, trapped with little to do. The discovery of Jamie's body is just as shocking as Laura Palmer wrapped in plastic, and perhaps even more so as the reaction to Jamie's death is so ambivalent.

The extended close-ups of Jamie's naked body are really unsettling. With her eyes open and her skin tainting more and more blue over the next days, I found it really difficult to watch. They were quite exploitative moments. The reactions her "friends" have to her death make it even more difficult to watch: the girls, who say they have known her since kindergarten, seem perturbed but largely unfazed. It was kind of heartbreaking how little reaction there was, and I wonder why that was. Is it a commentary on teens being so disaffected that the murder could happen in the first place, with the friends left behind not much worse than the killer in their midst, or did the filmmakers fail to explore the reactions in the group?

I definitely feel the film could have explored the role of loyalty a bit more: when one of your friends kills another, who do you give your sympathy to? Layne pretty much flat-out says Jamie was "asking for it", but would a whole group of friends think that way? Would they really think that, or make themselves believe it in order to stay strong and rally around Samson? Sadly we're not given enough insight into what the group dynamic was like before the murder. Only towards the end, there are some glimmers of a reaction, but it gives the audience very little to go on.

Still, it is a very intriguing film, even if there are several plot-points that are absolutely ridiculous (like that over-emotional screaming teacher, whut?). The soundtrack is just absolutely silly, that flute when Clarissa and Matt walk home at night is so hilariously misplaced. I actually paused my video player to see if a random ad had come on in my browser, it was that jarring.

My main gripe with the film, something that really took away from my "enjoyment" of the film no matter how hard I tried, was Matt's 12-year-old brother Tim. I'm sorry, but Joshua Miller is such a terrible actor, I wish they'd made Tim just a little older so they could have gotten a better actor in.

With a better Tim and a better soundtrack and perhaps a little more attention paid to emotional development, this could have been unreal.

Absolutely amazing insults, though: "The only reason you stay here is so you can fuck my mother and eat her food. MOTHERFUCKER. FOOD EATER."