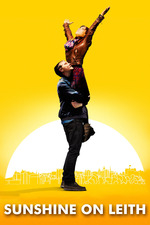 George MacKay deserves the world. Is there anyone more beautifully earnest than him?

What a wonderfully big-hearted film. I will admit this film was sure to be a hit as I visited Edinburgh for the first time just a few weeks ago, and just loved it. The film is like the city, welcoming and rich, relatable. The Proclaimers I quite like, and their music is very well-suited for a musical. Since Charlie and Craig Reid switch vocals, there's an automatic sense of a dialogue going on, which is used to great effect in the film.

It's a big hug of a film. The script is not original, but it's just too difficult not to like. Still, there are some moments where the script struggles to smoothly transition from one moment to another. I found the falling out between the great Jane Horrocks and Peter Mullan rather odd, despite these two genius actors giving their best, and the same goes for the moment MacKay and the lovely Antonia Thomas hit a snag in their relationship. The script does a great job of integrating all of the songs into a natural flow, and it does succeed, but with those two pivotal moments, it could have set it up better. Now, reactions just felt rather unnatural, and the scenes felt rushed.

That criticism aside, it's a lovely film with a big heart and an enormous sense of fun. Lovely, lovely, lovely. So lovely it would have made me cranky, if it hadn't been for such great actors and postcard-perfect Edinburgh.