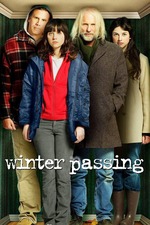 This is a quirky film no doubt about it. In another's hands this would be a comedy of hijinks. You have extremely unique characters living strange lives and coming together for various reasons mostly unhappy ones. It would at least be a black comedy.

And it's not to say there aren't funny moments because they are - but they aren't sought after. They come naturally alongside these characters. One in particular. Will Ferrell plays this so understated I could barely recognize it was him. It's a choice he rarely makes, but it works well for this film.

It was a bit tougher seeing "New Girl" in a character that is hard drinking, near junkie, and someone who uses sex as a way to block out the world...but it worked.

Ed is kind of in the background of this film despite his top billing, but towards the end he gets a few money scenes with his daughter Zooey.

The best part about the film is it's hesitation and outright refusal to have a Hollywood ending. This is not the film with the warm fuzzy, everything is changed - all relationships are fixed nonsense. Progress has simply been made and things are just better than they were previously. But work still needs to be done.

All in all a solid if unspectacular film. One problem is in rewatchability. It's droll and slow burning enough that I don't really feel like a second watch would do much.

There's just nothing to really separate it from the pack of similarly themed indie-fare. Not bad, but ultimately forgettable once the credits roll.

So at the end of the day I'd give it a passing grade because there is enough holding it afloat.