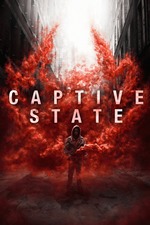 Captive State is an outstanding example of a pretty decent movie that might have rather been developed as an excellent TV series with the same cast and creator. This intriguing post-apocalypse sociopolitical drama (disguised as an alien invasion film) is directed by Rupert Wyatt, who cut his teeth on similar themes and genre with 2011's superior Rise of the Planet of the Apes. For a massive financial flop that was undermarketed and never really found an audience as a genre-tweener, the film is working with a really capable cast. John Goodman and Ashton Sanders (Moonlight) do most of the heavy lifting, but Vera Farmiga, Jonathan Majors, James Ransone, Kevin Dunn, Alan Ruck and other recognizable faces are involved.

Ashton Sanders plays our focal character, a reserved but earnest worker-bee young adult that had been separated from his older brother, who was widely presumed dead from war-related events taking place before the film's main timeline. That brother, Jonathan Majors, is one of the vocal leaders on the ground for a large-scale rebel network that wants to strike out against a government that is in full cooperation with mysterious alien overlords with a real obsession for drone spying and body chipping. We don't really learn much more about the aliens' motivations or the extent of their power or the details of their deal with the government unfortunately, but hey.. they look kind of cool? The crux of the film has the two brothers re-uniting and this rebel faction working out a plot to strike out at the government and aliens. John Goodman's character works in the government, and we also follow his character quite a bit as the other lead. His character is purposefully obscured a bit, with seemingly conflicted views and actions taken. He's a strong asset to this film, as he generally is in any project. The film is much more about this rebel attack and presenting society's fight to reclaim a "normal life" than it is a true sci-fi thriller or alien action movie. This is fine to me and not a detriment to the story potential, but the results of the world-building and societal dynamic are only about half fleshed out within a film's run-time.

When I say this film would have made for a better TV series, what I mean to say is that too many aspects of the plot feel rushed and aspects of societal dynamics feel underdeveloped at the same time. The core stuff you need for great material is here, which is why this film still really works in its best moments and has a certain general watchability. John Goodman is a conflicted and guarded man in a position of governmental power. Jonathan Majors and Ashton Sanders play brothers who have grown up through a bad situation, with the desire to fight for change. You can feel the the passion, hearts on their sleeves.

Ten years after an alien invasion, the film presents a world that adequately feels both entirely similar on some levels and entirely different on another from real life, much as I would expect society to look if aliens invaded in real life and controlled the governments. It is to the film's credit that they kept this somewhat grounded approach, with society and life persisting in the most conventional sense, yet under a more lethal and watchful eye. The film does run into a couple serious drawbacks that limit the overall story power, though. The alien/government deal and dynamic is vastly underexplained and underexplored. As viewers we are asked to take a lot of wild ideas for granted, for the sake of focusing on the human government vs. human rebels storyline, but it is harder to feel the stakes of the situation at times when the overall premise feels a little shaky. The other thing I would have liked to see more of would be the actual social class dynamic that should have been a big part of this theme. The film distinguishes between citizen and government well, but only hints at the affected disparity between classes of different citizens and how they are surviving differently in this world. I do not think it is a coincidence that this film was set in Chicago and uses a variety of black actors living in the slums at the core of its rebel uprising, but again, these huge sociopolitical dynamics are only explored in the most shallow and unfulfilling of ways.

As mentioned, the story was filmed in and takes place in Chicago, which is one of the better aspects of the world-building. It didn't take that much changing to make parts of Chicago look like a post-apocalyptical wasteland, and this world feels genuine and lived-in while providing the real-life setting to keep that element of real-life grounding and situational fear for the viewer. The film also makes good use of Solider Field for a key sequence.

Flaws aside with the world-building and sociopolitical details, it's a pretty entertaining watch due to well-paced direction, a reasonably strong lead cast, and a good setting. There are enough alien-related action scenes to keep things from getting too boring, but just remember that this is ultimately a movie about the people and its mistrust of government. Since we know the government is fully onboard with the invaders, there's really not a lot of wiggle room for viewpoint here. It's easy: the rebels are right. It's a shallow examination for a film that is more about social dynamic than the action, but it's worth a watch.