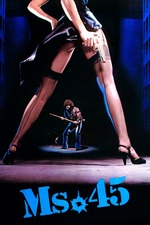 Indeed, complication is Ferrara’s greatest coup here, with his subversive touches twisting Ms. 45 into a corruption of the traditional “rape-revenge” trajectory. Rather than defeminize herself to reinforce her wrath (as is common in such films), Thana supplants her demure disposition with a predatory but nonetheless feminine sexuality. She harnesses trauma in order to be reborn as a vengeful vixen, leather-clad and lipstick-adorned, silently stalking the men of NYC with a pistol as her voice—each bullet signed with a kiss. While this atypical incarnation of the subgenre’s usual murderess figure embodies Ferrara’s vision of a kind of alternative female agency, it is ultimately Thana’s downfall that reveals the filmmaker’s true aim. In Kier-La Janisse’s autobiographical exegesis of exploitation movies, House Of Psychotic Women (FAB Press, 2012), the author succinctly sums up Ferrara’s concerns:

“Ms. 45 dares to deglamorize its female protagonist and her agenda. The film does a more thorough job than most in showing the consequences of giving in to revenge – Thana sabotages her own future, her career, a circle of supportive friends who are themselves outspoken women who could have helped her. This gives the film a sense of sadness and regret not always encountered in the standard rape-revenge films, which are more centred on how the male assailants have ruined their victims’ lives, and not how the women contribute to the ruination of their own lives. Thana may be triumphant briefly, but she loses out in the end.”

It is precisely this doomed quality that makes Ms. 45 such a standout among other films of its ilk. Not only that, regardless of genre or cinematic inclinations, it is an outright remarkable work due in no small part to Ferrara’s moral consideration of material often deemed too “trashy” or without aesthetic artistic merit.

Originally published, as a response to Sam Tunningley, at The Seventh Art.