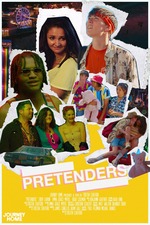 If Pretenders needed a tag line,  it would be 'This Movie FUCKS'. (or this movie SLAPS depending on who you're marketing it to.)
Pretenders is a film of growth, not only of the characters' journey but of that of the filmmakers'. A spot on depiction of the indecisive, irresponsible nature of early 20s purpose searching youth.
This is the second film ive seen from Stafford and his crew. The parallels ive noticed from his previous film (the importance of us) strikes such similar chords of Stafford's depictions of very young adults processing trauma from internal and external sources. He wants his characters to struggle with mature decision making that the audience may head scratch at but that's the point. I myself needed to stop myself from questioning the antics of Larkin and Grace-Meyers' and needed to remind myself "STFU, Sam. You did that same S*** when you were 22." The story is full of 'look in the mirror' moments to which the characters either are disgusted by what they see in their realizations or more so with Larkin's character rejects the notions brought up by the mirrors. The vacation spot is the perfect backdrop for three 20 somethings to pause their troubles for a moment where there are no consequences of the choices in life they've made up to that point. This limbo works well as a safe space to eventually get knocked down when reality reminds the pretenders of their true identity.
This is a comedy, is it funny?
Yes, but sparingly. This isn't a 90 min romp. Jokes have meaning. Either to cover up an insecurity or for a Joke of consistent vomiting by Coleman's character. At first it works well on the surface,but as he unravels, the deeper meaning of the sick becomes clearer. When the movie wants to be light and quirky it does that exceedingly well. And when the switch needs to be turned from the 20 something carefree comedy to a dose of reality, it accomplishes that seamlessly. They don't compromise their story for gags and it works.
The score emulates the themes of the movie well you can tell a guitarist made it and he establishes the tone of the film with as much authority as the rest of Pretenders.
Technically speaking this is an indie marvel. With the film crew working during a global pandemic, any technical issue like a drop in framerate during a transition is irrelevant. Anyone that says it takes them out of the movie can F**k off. The Stafford eye is in great form with the lighting of the beach-scape, especially a night boardwalk sequence are visual candy. The only gripe i have is a continuity error. One i didn't even catch. Watching with my girlfriend, I said the phone lost by Grace-Meyers character would come into play later. She disagreed because the red phone is in her pocket in a beach sequence later on. And that's it. A blink and you miss it that would have been a quick fix if there wasn't a global pandemic. The rest of the film is unapologetically unique, the bird's eye shots captured via drone, the camera splitting into two to see Grace-Meyers and Larkin's characters distance themselves physically and emotionally.
I certainly enjoyed the film and i truly believe this was an enormous leap in the skill Stafford and the whole crew put on display. I look forward to the next project from these artists.