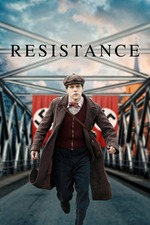 With Resistance, writer/director Jonathan Jakubowic sets out to tell the story of a period on the life of the famous mime Marcel Marceau which is arguably not exactly common knowledge. Through his work with the French Resistance, Marcel helped to save nearly ten thousand children during the Second World War. Those expecting Resistance to heavily involve Marcel’s work as a mime are going end up receiving a bit of a grim reality check, since other than some clownery in the first act of the film, since is a deadly serious Holocaust film. In fact, the film features some almost disturbing moments of Klaus Barbie executing Jewish prisoners in the pool of Gestapo’s headquarters at the Hotel Terminus, including a suggested act that I am glad they do not show.

Ultimately, while Resistance is a film that ensures that we do not forget the horrible acts of the Holocaust, it also acts as a reminder that there were also symbols of hope that came out of the Second World War.