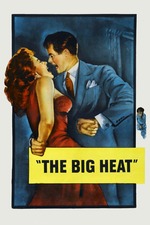 It makes perfect sense to put Lang at the helm of this picture. It's a very straightforward noir film that follows stuff that came before. It's a messy police/politician drama that has the exact right amount of twists. The story was fleshed out by a Sunday serial writer. All that was needed is someone to make it look good. And Fritz Lang does give the film an interesting look.

I was expecting more to be honest. Metropolis, M, Dr. Mabuse; these are films that changed cinema. Bold, risk taking, that's what I've got from Lang in the past and was hoping for more of that in The Big Heat. What I got instead was a very standard noir. Good guy. Bad guys. Dames, drinks, and rash decisions. The Bannion character has nothing below the surface. His motivations are never made clear.

That being said, it did hold my interest. There are some really nice sweeping shots that keep the film moving at a fast pace. There are a few acts of violence that make it seem slightly edgier. If you're in the mood for film noir, this will definitely satisfy your craving.