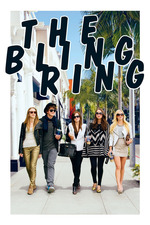 I have to think the real story was way more exciting than this.

This is a poor excuse to show teenagers dancing, doing drugs, and wearing high fashion. Once you get an about an hour into the movie you come to realize this is basically two or three scenes played over and over in succession. Sophia Coppola is near the pulse of the social media generation, but misses the mark by making a terrible movie about a true story.

The concept has so much potential. Just look at Korine's Spring Breakers. A movie that is all about teen excess and makes it look cool as hell. That movie succeeds for a lot of reasons. I think Korine is a MUCH stronger director than Coppola firstly. But what really made Spring Breakers memorable for me was it's humor. It didn't shy away from making fun of itself. James Franco's Alien was one of the funniest characters of the year. This movie on the other hand, tries to be deadly serious.

I can only watch teenage girls walking down a sidewalk in slow motion so many times. Every one of these kids are terrible in their roles. I understand they were going for fake, vapid, etc. but it comes of as acting. Unclear how much of that has to do with Coppola's direction. Emma Watson in particular seems like she's definitely got some chops. The whole thing ends up being super forgettable. I can just imagine showing this movie to someone in 25 or 30 years. How BORING were kids back then? It's just missing something.

The last half hour or so when consequences start raining down actually puts the movie back on track. But at that point I was pretty lost. There are just too many oversights and small things that make this movie suck. Sorry, Sophia. I really do want to like you.