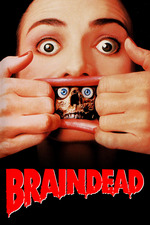 Horror Scavenger Hunt January 2019 - Day 3: A horror film directed by someone that has won any Oscar for a film he or she has ever made…list the Oscar!

Peter Jackson could've been my favorite director. He's talented, he's gross, he seems like a nice dude, but then he decided to make trash movies, which is how he won his goddamn award. Every time I shit on the LotR movies, I lose like five followers, so goodbye guys, it's been fun.

I don't know how to review Dead Alive. It's in my top ten favorite movies, but everyone's seen it, so what's the point? I'm gonna chug an entire bottle of NyQuil and take a nap.