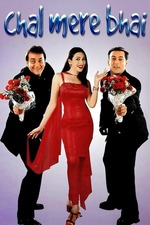 Chal Mere Bhai is yet another typical film for those weekend Bollywood film watchers. It is a light comedy and contains everything that is needed for a spectacular film. A top-notch soundtrack, a brilliant storyline, and outstanding acting done by the actors. Although the soundtrack is lengthy, all the songs contained in it serve a purpose as they are memorable, yet addictive (talk about the title song..). The film is about a strong bond between two brothers, Prem and Vicky who are both in love with the same young lady, Sapna. Sapna is very clumsy and always ends up doing the wrong things when she sees her boss. Salman Khan and Sanjay Dutt play their role as brothers very realistically. They crack jokes, play pranks together, and even exercise together. They even look like real brothers due to their own friendship behind the cameras. Salman just makes this film better due to his happy-go-lucky attitude, and charisma which forms the overall mood of the film. The movie’s main message is about love, brotherhood, family values and sacrifice.

(I recommend those Salman Khan and Karisma Kapoor lovers to watch this film, it’ll only make you love them more❤️❤️)

My favourite scenes are when the brothers tell Sapna to be sorry and she begins to cry. I love how they joke around a lot with her😂👌
I also love how Prem was joking around with Sapna, saying that he loved her but then he kept trying to hide it by saying he was acting🙈🙈

I couldn’t breathe when Salman was shirtless, god, what a creature😍😍❤️❤️🔥