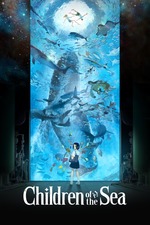 Children of the Sea

I don't think the State Theatre was ready for a 20 minute dream-trip sequence that gave off 2001: A Space Odyssey x Evangelion's third impact x H20: Just Add Water vibes. Aside from that being intensely amusing to me, the entirety of Children of the Sea is just gorgeously drawn and painted eye candy, beautifully coloured and layered together. I have a feeling that the art direction here took up the vast majority of the budget because where this film is lacking; mostly everything regarding narrative, characters, plotting, etc, and sometimes the animation department as well; shows quite badly, but the visuals are enough to sort of drown that out. What results is fairly relaxing and easy watch, a surreal summer slice-of-life, which I'm an absolute sucker for on a good day. Joe Hisaishi does the score which is another high point, but his stuff with Miyazaki and Kitano is usually much more of a stand out. As an anime, it is far from perfect but still one of the prettiest I've seen this year. Unfortunately this film is not likely to get much in the way of a wider theatrical release in Australia so seeing it on the big screen will be unlikely, which is a great shame because that's where the stunning pictures belongs.