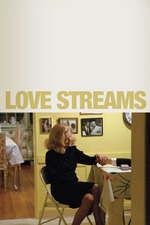 Fourth watch... Didn't fully realise the potency of Cass's humor and slapstick potential until seeing it with an audience at Le Champo, Paris.

Still maintains its vitality as it portrays two opposite ends of one person, THE person, and how in the strive for balance, they manage to pass eachother at the crossroads hitting a shore of new understanding about their own flaws. Ultimately they arrive at a realization that the struggle to become independent just made them appreciate dependency in a more honest way - but still ending up at the wrong side of the globe and being more lost than ever.

Sarah needed to be more dynamic with her loved ones, letting her conception of endless love find a new diversified meaning. Her operatic vision made her finally listen to what her husband was saying; even if their love had changed they can still give their daughter a balanced stream of affection - something expressed in how Debbie kisses both her parents in the dream. Even if love never ends it can branch out; forming new rivers that carry on the flow of a previous path.

Robert is dependent on others more so than Sarah, but only to cover up the void he drowns in as he faces a day alone. His literature tries to present an argument for how his life should work but it's empty gesture since all he ever wants to know is the inner workings of women, a total preoccupation with others - to take their essence and make himself feel enamored with the love within each individual's hidden mysticism. All they become is a story in his perception, their actual desires are turned down whenever they ask something of him. Sarah's arrival and nervous state brings out the first glimmer of hope. It's not just verbose posturing but him wanting to put in the ground work for a person he truly cares about. If only he'd listened to his writing, you can't place your own happiness on the shoulders of another. It becomes fragile and the moment desire shift, you're left in its wake forever. This is a similarity between the two of them, but even if Sarah overly depends on her family's affection, she has established a character that feels and gives love to everyone; even strangers and smelly sick people. This is a signature to who she is. Robert's final blow stings since we know he'll just regress into himself worse than before. He did not find an endless river of love within him to let flow outward; he was just a beach-rim that frolicked with the impact of Sarah's loving waves.

Thematically it extends the deflating masculinity tropes of Bookie, seen here in the sadly comical treatment of a suave cocktail elite- macho that riffs on the classic Hollywood character that's outliving his time. The final signature move of Robert waving his pathetic overblown hat makes you think of a western hero, but there's no dignity left to end the picture on, just a wistful recognition that love is constantly moving - and for some it will always be away.