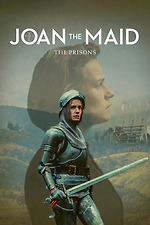 Joan the Maid II: The Prisons

Marginally better than Part I, but still very much an exercise in overstuffing. Particularly to my chagrin was the choice of material from Joan of Arc’s chequered life. Incidents heavy with spectacle and symbolism were merely described by the interviewees, while the viewer was mostly plied instead with barely distinguishable dukes, priests, and women named ‘Jeanne’ hitting their marks in overlit interiors, supplying uninteresting dialogue in a seemingly uninterested fashion. We were served up more in the way of heaths, tents, golden afternoon sun, firelight, and fog, but there was only a limited extent to which these could vivify the ponderous players. A slightly better fist was made of interposing the copious historical background in this case, as well, through quotation from documents, and just a touch less insistence on characters constantly clarifying who or what it was they were discussing. It was still the case, however, that we were compelled to hear the exact circumstances surrounding a duke’s father’s axe murder, and bucketloads of similar context. These desiccated conversations, and the lolloping pace, meant that emotions never seemed to be running high; a brake to sensationalism, yes, but also a brake to thrust and relevance. The bulk of the film sat in the shadow of two almost consecutive scenes, to which all those sparse, impassive backgrounds could not hold a candle. Pomp, and grandeur, and a greater significance, cascaded from the screen during the coronation at Rheims. The slow, deliberate actions which had defined the piece thus far suddenly became purposeful, rather than purposeless, and the splendour, and mighty substance, of the ceremony’s rituals was such that one barely dared to breathe. The collective swaying of the crowd as they strained to see more clearly was the lift-off from the literal which the film had never seemed to be straining for, but was clearly in need of. Soon after this, there came a scene at the walls of Paris, which showed matters becoming horribly real for Joan. Here, we saw the ethereal world which Joan saw, thanks to the saturated green and the hushed tone. The slightly wider shots captured, profoundly, the contrast between Joan’s fervent conviction and the depth of the moat before her, and the sharpness of the arrows flying past her. After these, an all-nighter to see a ghostly white woman supplied some much thirsted-after variety, without actually presenting a new angle on the narrative tunnel, and, as Joan’s trajectory listed from onward to sideways, unfulfilment did become the dominant sensation, in spite of the fact that individual exchanges continued to lack energy. We were able to spend a little more time alone with Joan, but the practised, oratorical delivery of her prayers denied any impression of communion with a divine presence. Two cries she gave off, one a hysterical laugh on the forty-first day of her trial, and the other as she was burning, testified to a conflicted woman who could see everything, but was compelled to acknowledge only one path. The rest of the time, such as when she was arguing about Mass and men’s clothing while in prison, the content of her speech and the manner in which it was spoken was so measured, and so mundane, that giving a fig one way or another was rather a struggle. The whole five and a half hours of the project contained one terrific two-hour film, and three and a half hours of standing around. All right for some, maybe, but a patience tester even for a cricket fan.