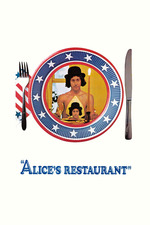 From a young age, I have made it a tradition to listen to the song Alice's Restaurant Massacree. It began with some station, either The Sound or KROQ, playing it every year at midnight, when I used to listen to the radio so I could fall asleep. I then decided to listen to it during the day of Thanksgiving, so as to not interrupt my sleep and because I now need silence to fall asleep. This was over the span of only 3 years. Then, 2 years ago I found a dvd copy of the film adaptation, starring Arlo himself. I found it the most boring thing I'd ever seen, though this was before I had seen Tarkovsky's Mirror. So, I'm just gonna post the timecodes for the parts that aren't bogged down by relationship drama, or dirtbikes.

Edit: Timestamps were inaccurate depending on if you were watching the DVD with your player, or on you PC. Sorry.

If you want to watch the good parts that aren't directly adapted from the song, it's difficult to timestamp, since the only parts that ruin the movie are anytime Shelly is on screen, and the scene concerning Woody's passing needs Shelly's in order to understand it. I think they could've made the plot with Shelly into something, if it were just a bit better thought out.

Fiddler on the Roof