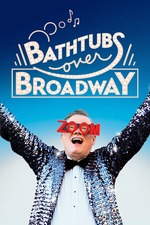 I was motivated to finally watch this because it's leaving Netflix tomorrow, so hurry and watch it before you read my review.

The story of how The Bathrooms Are Coming is intertwined with a biopic of Steve Young, the writer with the most seniority on the late Late Show with David Letterman. It details how, as a comedy writer, Young has developed more discerning tastes, and how specifically for being one as long as he has, these tastes lie on the fringes of comedy. What even the most stalwart outsider would call outsider humor, a cenobite for funny. It is through pushing against the event horizon of jokes that the recurring sketch Dave's Record Collection is born, from his already humorous yet small collection of bizarre vinyls. In the search to expand the collection in secondhand shops throughout New York, he accidentally cracks the ice sheet into the cavernous world of Corporate Musicals intended to only have ever been heard by members of the company. Steve continues to act as the audience surrogate, taking us along for his journey to acquire more and more in the forgotten realm of Industrials, the shorthand for musicals of this type. Encounters with other collectors and former stars, it culminates in a contact discovering a YouTube upload of one of the tracks from the titular show and a comment below it saying "my aunt sang this." leading to the recovery not of the performance, but a film production on 16mm transferred to DVD. Soon after, he meets with Patti in person, and she leads him to the man who made it all possible, writer and lyricist Sid Siegel. The sudden collapse of the Industrial coincided with that of Detroit, the motor city, is played against Letterman's decision to retire. The musings of all these performers suddenly left without a leg to stand on, but still thankful to have done what they did for who they could, a sentiment Steve echoes. Steve goes on to write an entire book on the subject, which this documentary could be considered the companion piece for rather than the other way around. Soon after, Sid passes into the next great production and Steve says at his wake, "Life can be so rich and wonderful when we step off the logical path and embark on eccentric adventures." This is such a beautiful message, and it resonates that much more in the musical number Steve & Hank Beebe wrote for the finale, "Take That Step."
The only gripes I can lodge are we never get to see the Bathrooms movie in its entirety, and that the McDonalds, Coke, Pepsi, and Exxon shows are only mentioned. At the very least, we do get to hear the premise and part of a song from the Burger King show, and who knows maybe his book "Everything's Coming Up Profits" goes to that level of detail? I feel bad even complaining aboutit.