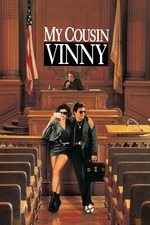 Remarkably, whenever I happened to catch this on tv, it was always at some point after the arraignment. So, at no point had I seen the first portion of the movie prior to Joe Pesci's arrival, which unlike my timing was mostly unremarkable, thus further ensuring I would never here any quotable lines from these scenes. It's funny, with two comedy of errors type misunderstandings, the phony confession and Vinny meeting the kids in the cell, but nothing that pops out at you like the recurring early wake up calls, or Vinny's multiple missteps of procedure, let alone his interrogation of Lisa at the film's climax. And even as I went further on, there were other scenes I had completely missed, such as when he knocks over Judge Haller's chess board or when he visits the three eyewitnesses in the world's shortest montage. All these moments I had previously completely blanked on yet were so integral to the plot functioning correctly. It's because of things like this that I have the rewatch list, because if I can't remember whether I watched it on tv or from redbox, then how would I remember if I even watched the whole thing?
And now that I've finally scratched that itch, I can get back into my semiregular biweekly watch schedule, and make up time by watching something else tomorrow.

The City of Lost Children