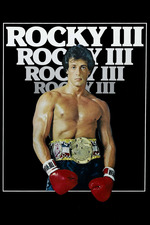 "You and that chump don't know where I came from. You call yourself a fighter, prove it now. Give me that same chance."
Rocky 3 takes everything that Rocky 2 did wrong and not only fixes it, but improves on it to make a better movie than the original. Rocky is smarter, harder, faster, and the rest of the movie is too. The romance between him and Adrian is more refined, his relationship with his son is neither overbearing nor swept under the rug, and the emotional arc he must overcome makes the Fly training montage from Part 2 have as much of an impact as the scene where Rocky gives his dog a bath. It all leads up to a victory in the final title battle that is more cathartic than when he first won the belt. And the scene that follows this is all the better for it. I'd also like to applaud the foley-work in this chapter. The screeches whenever Clubber Lang whiffed a punch especially stood out to me. The only thing I can call a drawback is how they don't explore the fact that Lang's story is the same as Rocky's in the first movie, but they are able to get around this by making Lang the most contemptible, poor attituded, unsportsmanlike person possible, and it's convincing.