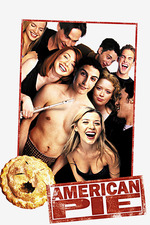 American Pie is a 1999 American sex comedy film directed and co-produced by Paul Weitz (in his directorial debut) and written by Adam Herz. It is the first film in the American Pie theatrical series and follows five best friends (Jim, Kevin, Oz, Finch, and Stifler) who attend East Great Falls High. With the exception of Stifler (who has already lost his virginity), the youths make a pact to lose their virginity before their high school graduation.

This iconic film is one I’ve been wanting to revisit for a while now, though I’ve been afraid that dated humour might tank it.

Thankfully, American Pie absolutely holds up as one of the funniest, most likeable comedy movies ever made.

Featuring a fantastic ensemble cast, a sharp
script and a banger of a soundtrack, the film is overall a lot of fun.