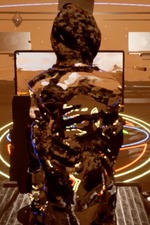 I've waited a day to review AIDOL because I had a hard time coming to terms with what it's doing and figuring out how to avoid tripping over other people's ideas. The influences behind AIDOL - anime, vapourwave, cyberpunk, various Asian pop music genres, PS2 games - are more or less hip, but nerdy and sometimes a bit backdated. It's a film set in 2064, made entirely with computer animation, yet it looks back to a much earlier age of CGI, when AVATAR was state of the art. The vision of the future offered up by AKIRA, BLADE RUNNER & early William Gibson novels has become an object of nostalgia rather than a commentary on our actual future; when I think about them, I remember the teenager who encountered them in the '80s or early '90s. Yet AIDOL feels completely up to date as a form of post-cinema. ( One of its wittiest ironies is the amount of nature imagery it used cheap computer animation to create.) Many people have opined that it would work better as a gallery installation, but its 80-minute runtime is based upon a sense of narrative dynamics, even if it has time for a lyric video. Although it's structured as an album (and director Lawrence Lek composed the soundtrack, available on its own), standing in a gallery and watching one of its "songs" would not have the same impact. Despite the distance produced by the constant voice-over coming from characters who rarely even appear onscreen, it cares about the emotions of humans and machines alike.

Keep an Eye Out