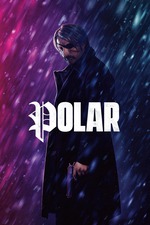 I liked the first act: Wild zany style and characters. Over-the, over-the, over-the-top story. Actors were good, camera work too. But just like John Wick or Taken, this hitman was so overpowered that it gets tiresome and paint-by-numbers. Adding Vanessa Hudgins to it just made it feel like a teenager who wrote her in to show how clever he thinks he is.

Don't see this if you want to feel for the characters. This is from a heavily-stylized, Samurai-Jack-type Dark Horse comic. It's supposed to feel flat and messy. (read the book and see what I mean)

The torture section was just lame and useless. The 3rd act is pretty forgettable and a bad setup for a sequel I called:
"Polar 2: This Time--It's Personal".

This had some potential with the simple Hitman Pension plot. If you're about to turn 50, you should definitely watch this. Mads will show you how it's done. Lol