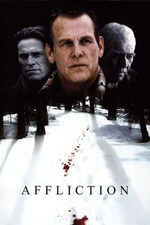 I frankly realize that Affliction will never be mentioned in the ongoing conversation concerning the ‘greatest films ever’—which, when you consider that I rank it higher than both 2001 and Seven Samurai, only makes this five-star rating completely ridiculous—but I’ll continue to champion it as one of the bleakest, most harrowing domestic dramas—and yes, one of the greatest films—of all time. A bold claim? If it is, then just ignore me.

Paul Schrader’s televisual directing style has proved time and time again to be his undoing as a filmmaker, but here, that’s not the case. The man is no formalist, and has always seemed more comfortable as just a screenwriter, but Affliction's lack of visual flair feels appropriate. Opting to shoot smalltown New Hampshire with ordinary camera placement and little to no camera movement seems less like a stylistic choice than his default setting, but it surprisingly helps in creating somber atmosphere, precisely what a tale like this needs.

I like to think that all great actors have that one role that they were seemingly born to play, and for Nick Nolte, that role is Wade Whitehouse. Nolte unarguably is an overwhelming screen presence, but throughout his career, he’s usually been typecast as grizzled, grunty characters, without ever being given a chance to fully explore his weighty persona. The amount of emotional depth in his performance here is staggering. It’s the kind of dramatic performance that’s intense and aggressive but never ostentatious; the kind that tends to go unappreciated and, ultimately, forgotten as awards season honors the bigger, showier performances. Opposite him is the equally demanding James Coburn—who unexpectedly won his Oscar—and whenever they’re butting heads, the screen practically crackles. Coburn is especially interesting, playing one of film’s most convincing onscreen drunks, because of how he acts whenever his character isn’t utterly soused. Alcoholism—or, really, addiction of any kind—is unforgiving to those that fall victim to it, because they’re forced to structure their lives around drinking; you can really feel that—with every mean-spirited quip that Coburn snarls at his son—he’s just angry that he’s sober, counting down the minutes until he’s able to drink again. Both actors are given chances to do some good ol’ fashioned scene-chewing, but it’s the moments of subtlety that truly impress.

Affliction is a suffocating, soulful, devastating experience, watching as Whitehouse inevitably becomes the father that he never wanted to be. Every man has a breaking point, and humiliation is one sure-fire way to get him there quickly.