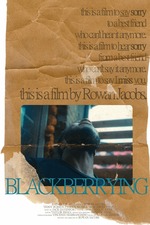 This enthralling mix of raw realism and uncanny surrealism makes for an evocative portrait of loss. By carefully balancing a sense of fantasy and reality, the filmmakers effortlessly convey the complex idea that grief can often feel unreal. Actual loss is so hard to deal with that our emotive recollections of those who have left us start to feel illusory. Present thoughts about an absence seem immediately contradictory, and things that we would never want to imagine are almost impossible to actually comprehend, even when they become all to real.

This is a really delicate and complicated subject, but it is conveyed with such clarity: a cohesive presentation of the incoherence of grief. We begin with disorientation, an immediate close-up on Teddy Robson’s Samuel before jumping, suddenly, to a slightly out of focus scene – the camera still close in – of Patrick Bayele’s Bo. The jarring cut is punctuated by an uncanny soundscape (from Letterboxd’s own Jack 🧠, a great follow and a terrific guy), full of repeating motifs and distortion – feeling electronic and strange as it balances a comforting repetition with discordant, industrial sounds. This soundtrack is the film’s backbone, cementing the uncanny sensibility and keeping the viewer on edge even when the central drama draws them in, and keeping the film feeling alien and strange even when it (knowingly) strays into cliche. The sound is reminiscent of something out of a Peter Strickland film – high praise indeed.

This sonic strangeness is, at every inch, matched with imagery. Our jarring jump to Bo is disorientating, somewhat too quick to even register on a first viewing but impressively apparent on subsequent watches (and a moment that makes perfect sense, and is very powerful, in retrospect). Bo gasps for air and seemingly has just been projected into reality – as if thrown directly out of Samuel’s mind. Bo starts to interact with the world around him (a nondescript area just in front of a house), looking at the incredibly normal – including his own hands – as if it is completely alien. This is further heightened by a film print border, imitating Super 8 film – which always instantly evokes ideas of memory, reflection and a sense of intimacy. It feels like a documented memory yet the content is so obviously of the present; this visual juxtaposition is one of many similarly powerful – and similarly intelligent – juxtapositions in the short. When the narrative becomes clear (and on reflection) we realise that this visual touch is communicating both how the past lives in the present and how things we wish were in the present now, tragically, belong to the past. It is also just a lovely confluence of overt artifice and intentional reality, again communicating our inability to process grief.

Bo then, in a wonderfully Lynchian moment, finds a key that happens to fit the door in front of him. This sends us back to the sound design, and Taylor Small’s effective editing, that make what could sound contrived or clunky into something enthrallingly dreamlike. The unreality never feels unreal but it does feel uncanny, the kind of uncanny that sends a shiver down your spine. The camera work, from DP Vincenzo Marranghino, also adds to this. Oscillating in and out of focus mirrors the dance of the reality and falsity – and of present and past – the woozy way the camera moves only adding to this. We are also usually very close in, almost attached to our characters as if they are the limits of existence – a powerful metaphor for our emotional lives and how certain events become our reality (and an important piece of visual storytelling for the film’s narrative).

When Bo is inside the house, him and Samuel speak. They know each other but something, which becomes apparent through inference, has happened. The event remains unspoken, this is not to be purposefully ambiguous but more to reflect the difficulty of talking about certain events – which takes us back to the primary themes. The pair talk emotionally and powerfully, projecting and exploring a wide range of emotions. There is a frank rawness to the conversation, a really impressive openness that cuts against toxic expectations of male insularity. Sadly, and very powerfully, we soon realise this openness only exists because this is a conversation that could have never happened. This open communication now is a result of closed communication before – and the devastating consequences of that. This is not a subversion of male insularity, this is a very intelligent critique of it. The unreality of the conversation is also established by enjoyably clichéd dialogue. The conversation is unwieldy and unnatural (once again, dreamlike) in addition to being raw. Our characters jump from naturalistic observations to deeply cinematic refrains and very heightened dialogue. It descends into conversation by way of cliché; using actual interaction to critique lack of interaction – how so many of our conversations are deeply performative and defined by theatrical falsehoods. It is very well evoked and, like so much of the film, says so much by speaking indirectly.

That is the beauty of this film, and it cements writer and director Rowan Jacobs as a very gifted filmmaker: this deals with incredibly delicate and emotive subject matter (ending in a dedication – to the memory of Millin Thomas – that rises naturally from the film in the most beautiful way) but it does so implicitly. It is very hard to talk, or write, about the topics this short takes on. Blackberrying manages to speak fluently about these topics, and with admirable sensitivity, by presenting the difficulty itself. This film is about unprocessed emotion and things that can never be resolved, and the filmic language is completely in concert with these ideas. It is playful, creative and experimental while never feeling pretentious or arch. It is emotional without ever feeling forced and manipulative. It just all works, every detail being individually fascinating but ultimately all part of a very cohesive whole. Blackberrying is a deeply impressive short that will stay with you far beyond its fourteen brief minutes, much how the memories of those we knew remain present far beyond their absence.

Blackberrying can be watched here.