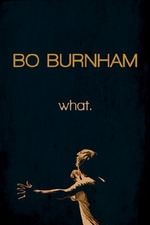 The journey continues and, so far, just not for me.

I love alternative comedy, I even love anti-comedy. I like things that bend, break and feel anarchic - I like transgressive comedy. This special thinks it is those things but is the most over polished and predictable imitation of this. Yes, it is full of moments that bend the shape of stand-up but these moments are very engineered and do feel expected. The subversions don't really subvert, they just reframe - and they feel like performative affectations more than anything.

Fundamentally, Bo's style annoys me. His insistence on lampshading every joke irritates me beyond end. He can't just have a good gag that the audience need to work out and feel smart for getting, he does that gag then plays a sound effect telling you the gag has happened and then does a joke about how he commented on his own joke. It is exhausting. It also saps the intelligence out of it; it goes from something that is for the audience - or separate of the audience (I think Stewart Lee is a great example of audience agnostic stand-up) - and changes it to a hierarchical positioning with the audience at the bottom.

Bo wants us to know that he is clever, but he also wants us to know that he knows he wants us to think this. And that he will make semi-deprecating jokes about this - that are actually not deprecating but he wants to seem deprecating. I guess another problem for me is that there's no dryness to the wit here. In fact, it is often not wit, it feels more like showboating. It is a list of pretty surface level observations about the world framed as if they are revelations and put into catchy songs. Then there is a lot of staging and production that is 'clever' but rarely, if ever, intelligent.

The problem for me is that I like entertainment that knows the thinking should be done by the audience. That invites the audience in and allows them to be in conversation with it. Burnham does something at the audience with this. He over explains, over writes and over performs. This may work better when it is further removed from the stand-up setting but the act sits awkwardly in it. Here, all the thinking is externalised and done on stage - and it is not that satisfying. There is no room for reflection or for any mental energy - it is very passive and, at least I laughed twice in the (admittedly inferior) Words Words Words.